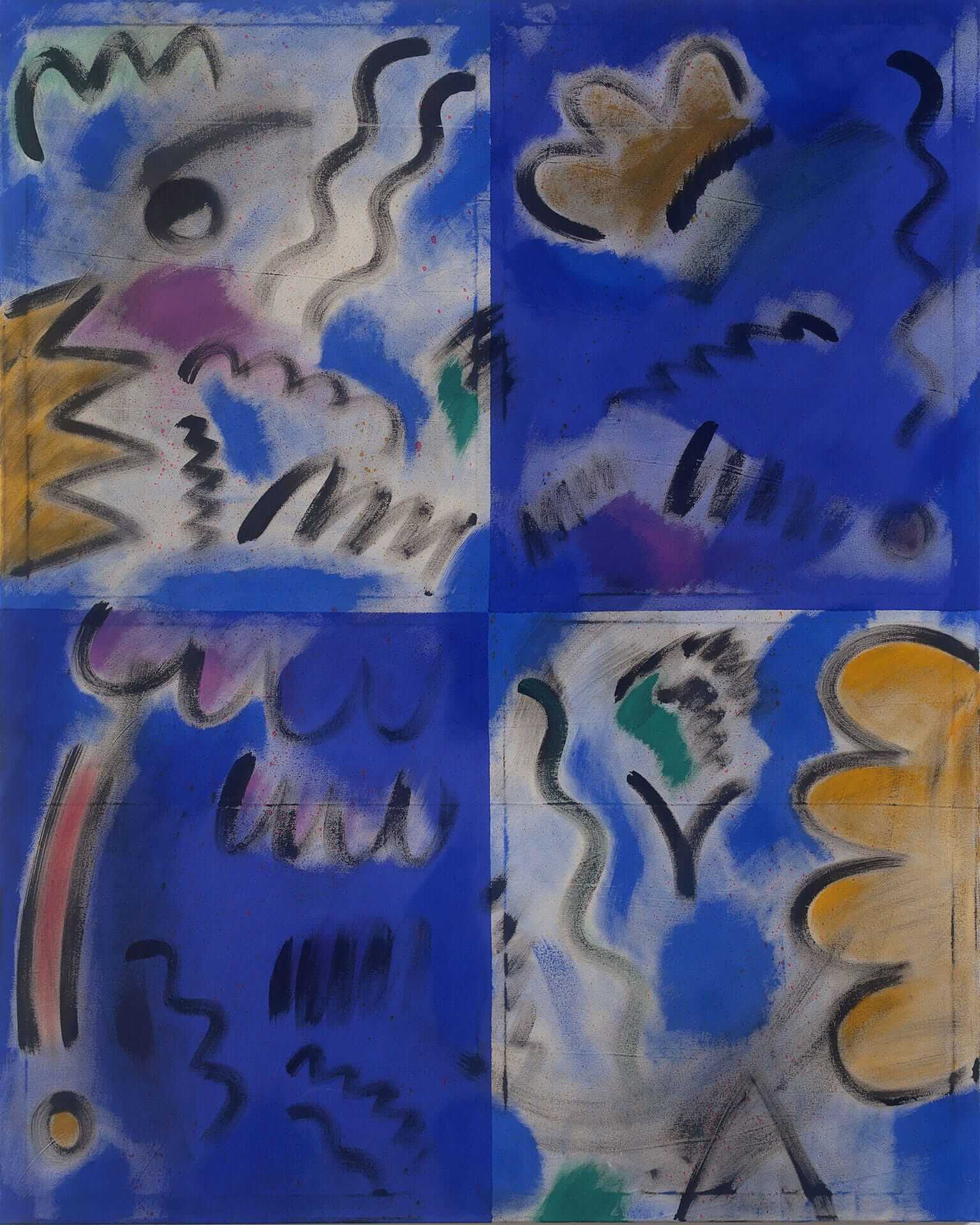 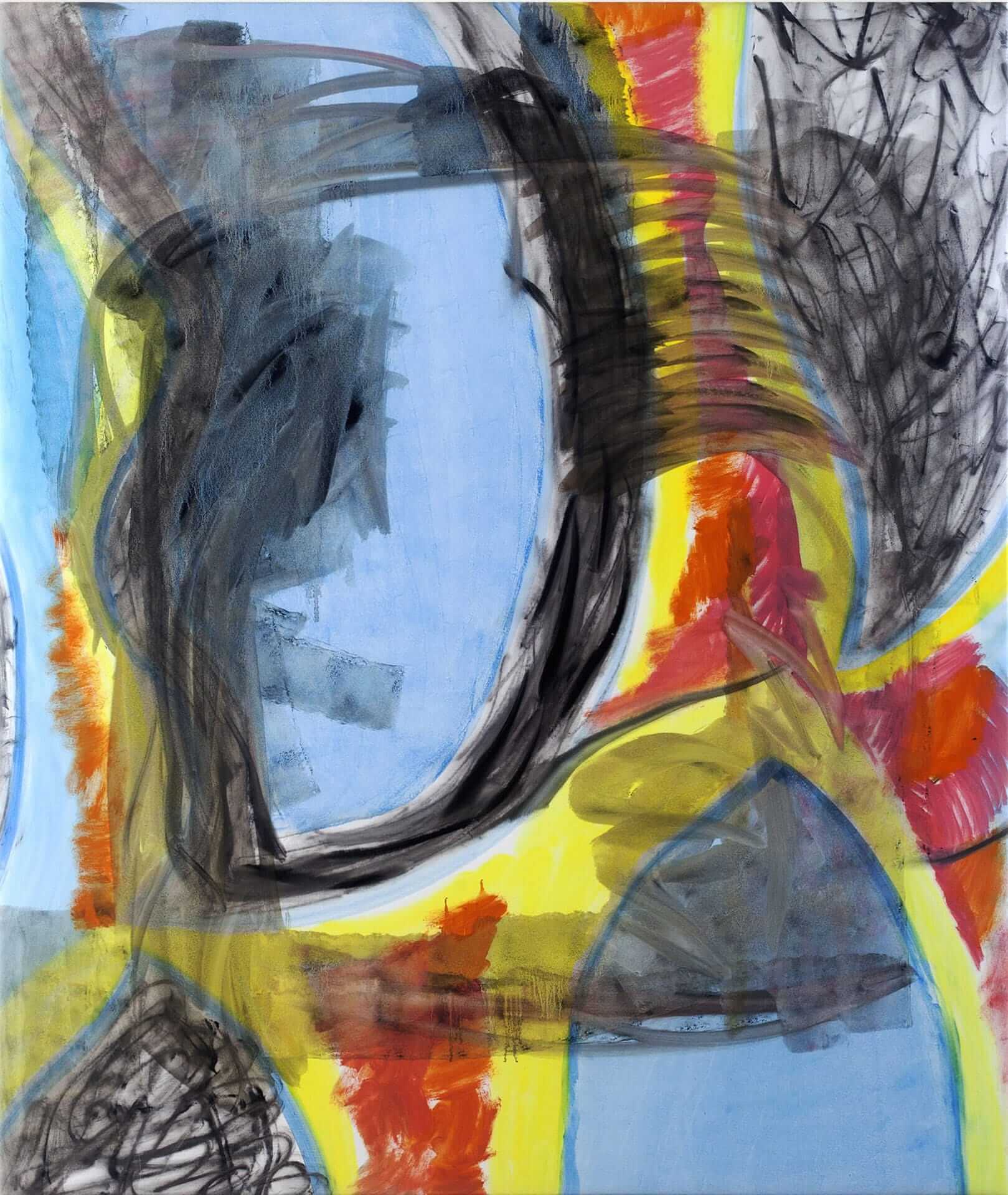 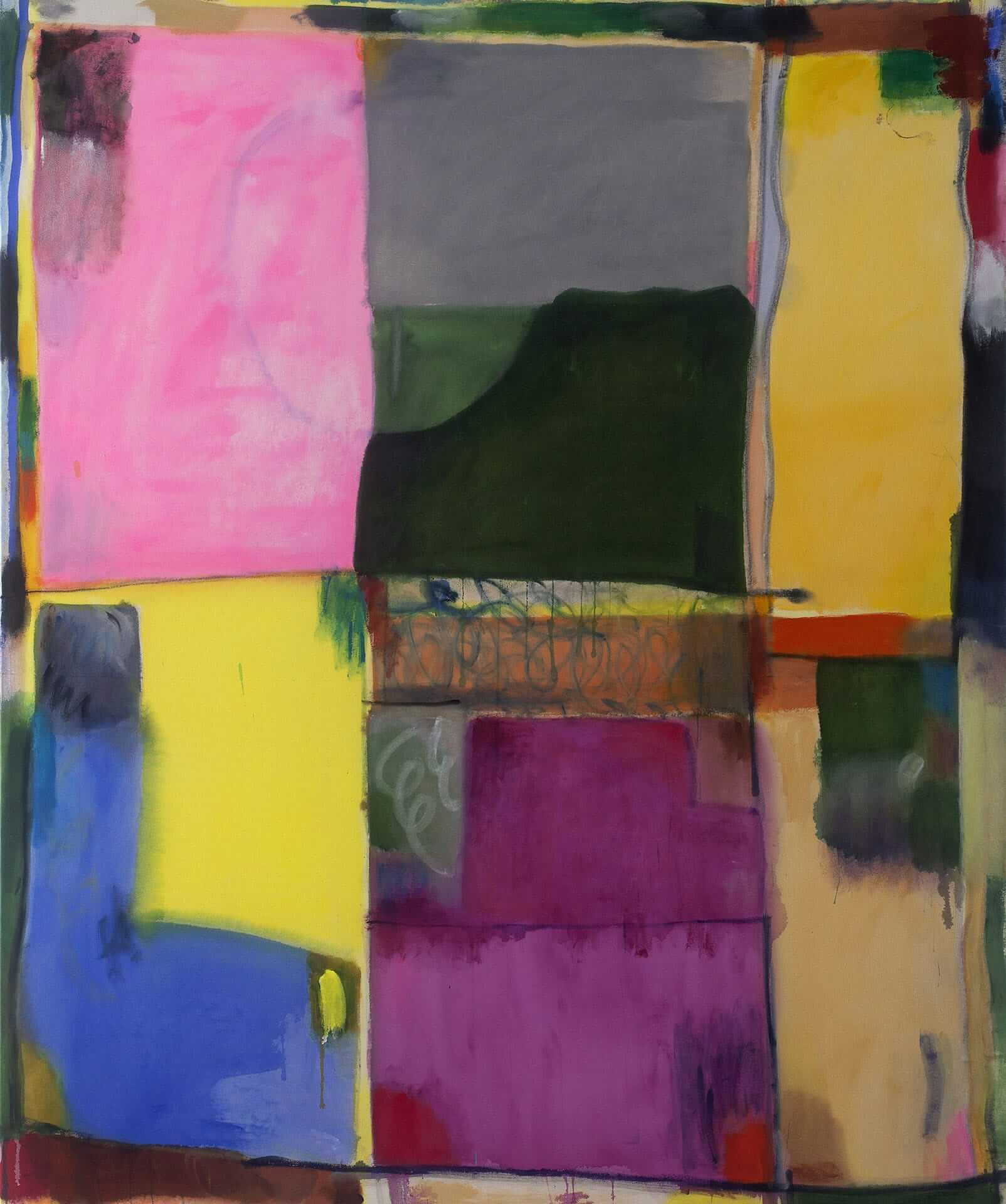 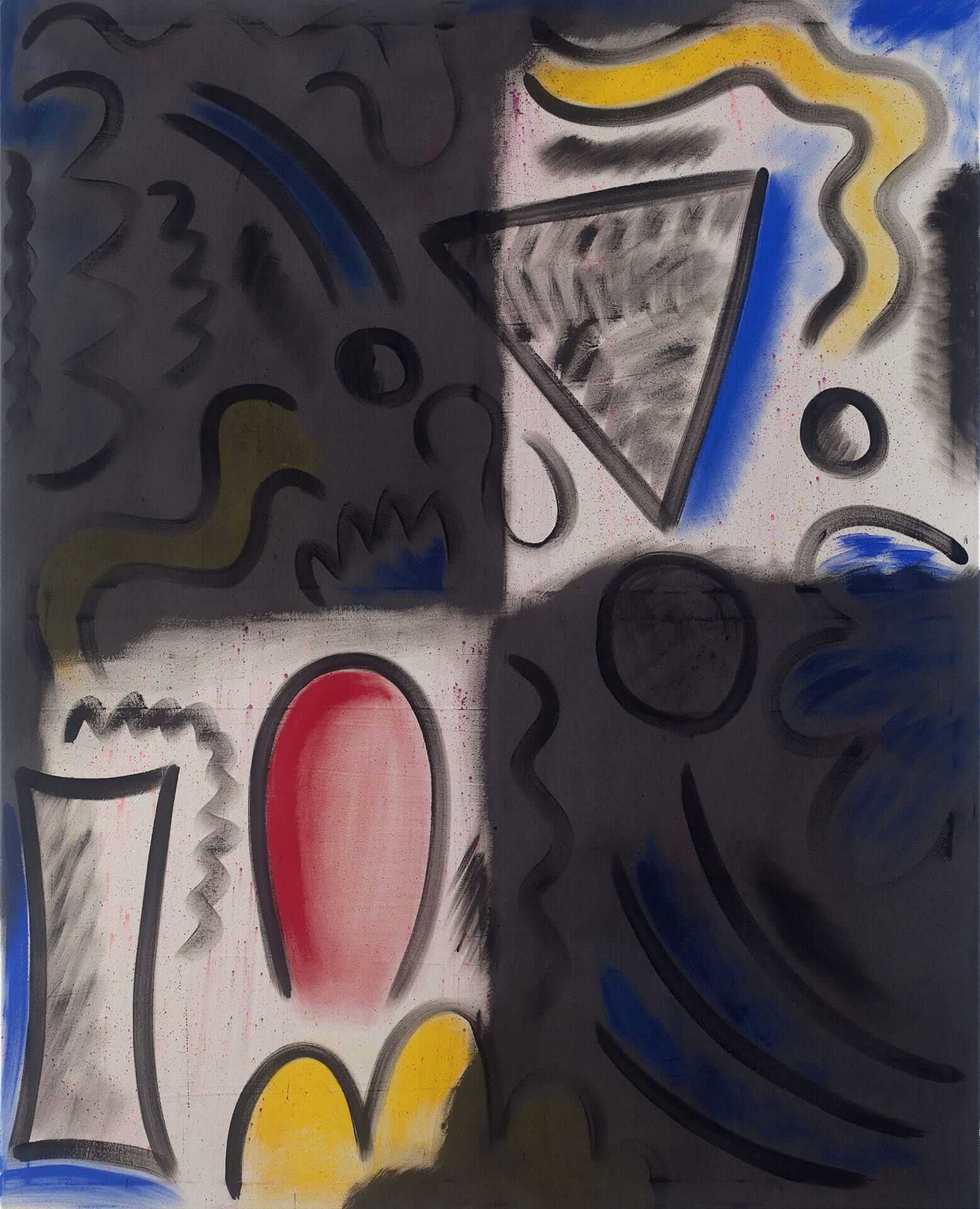 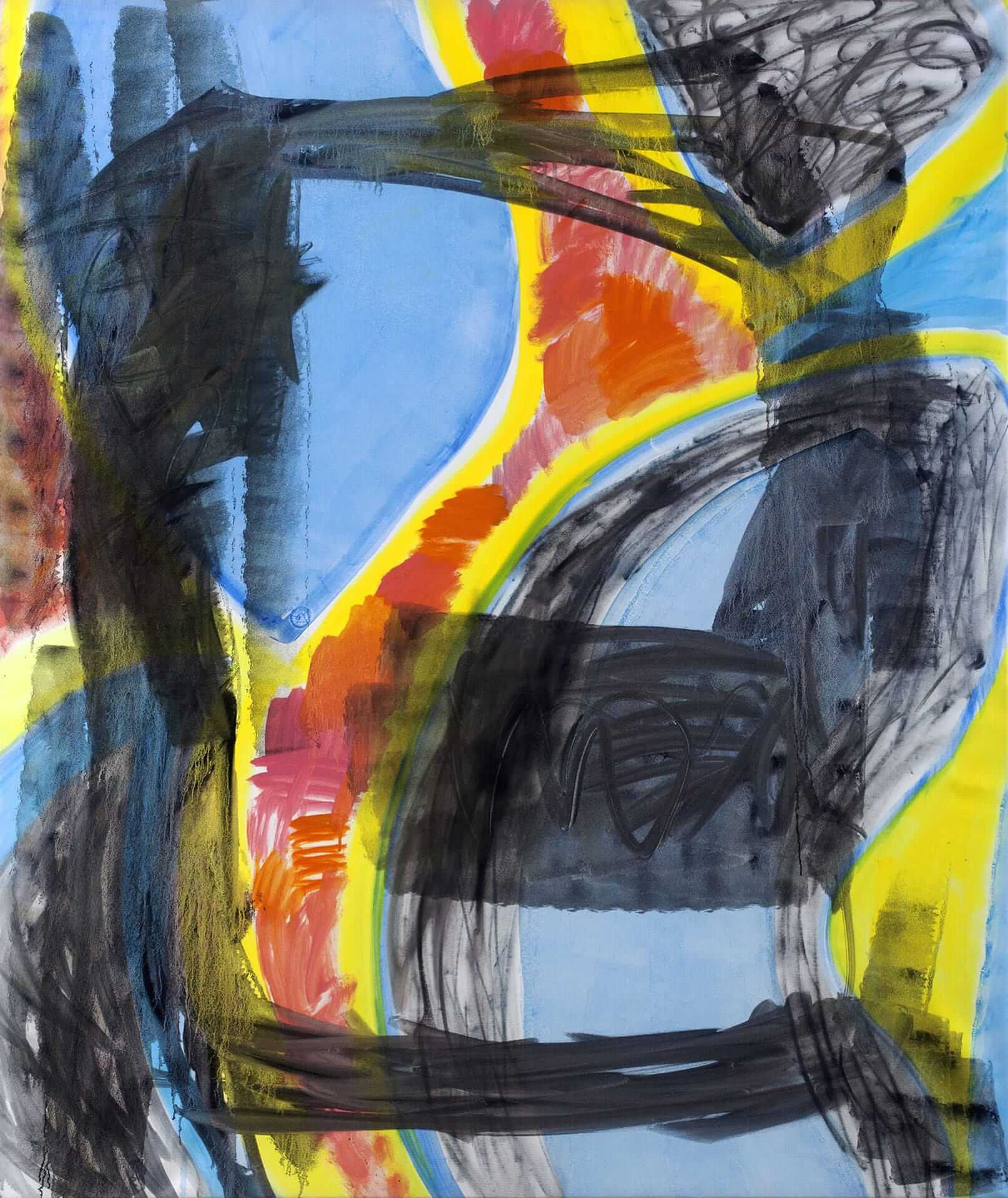 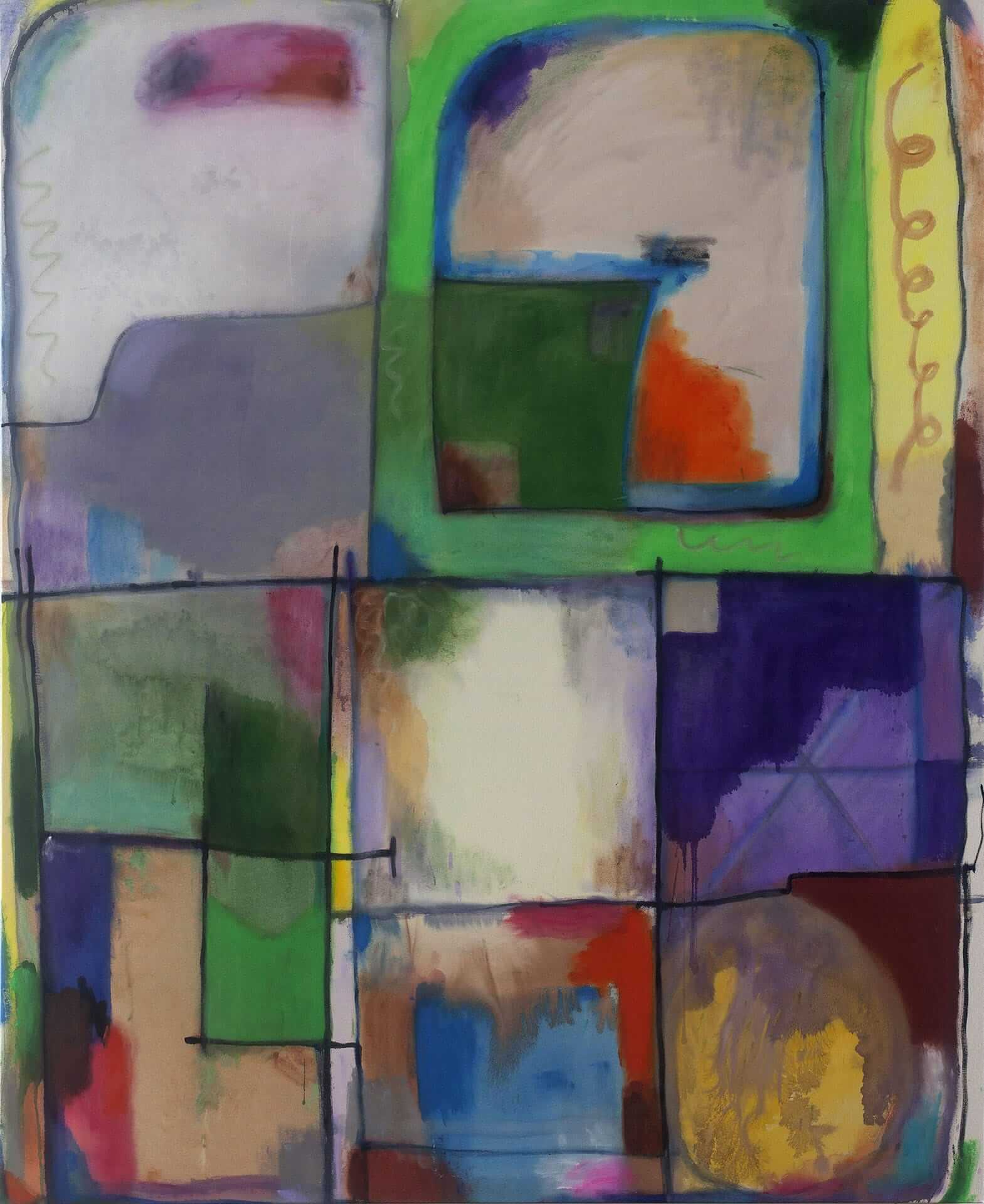 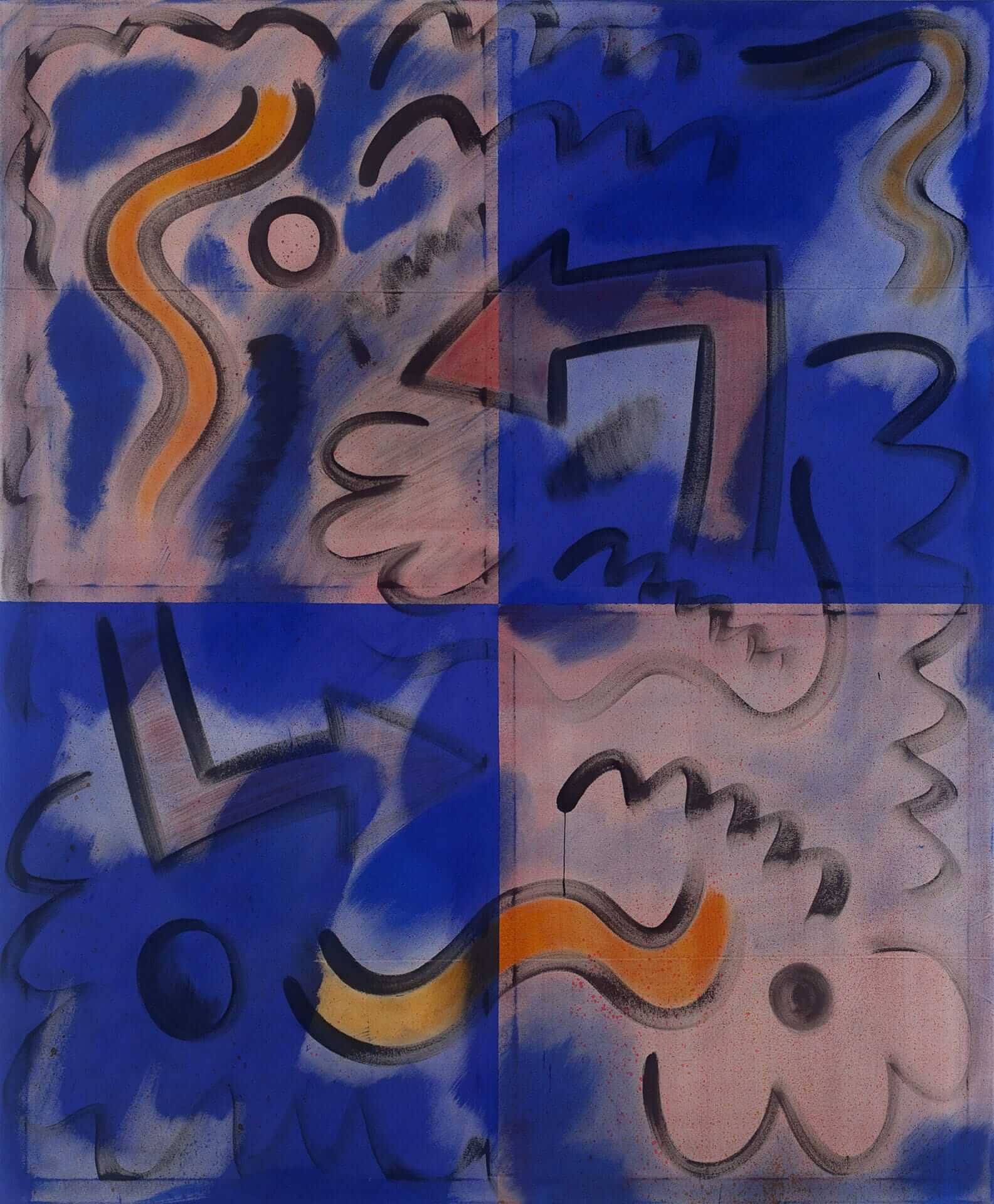 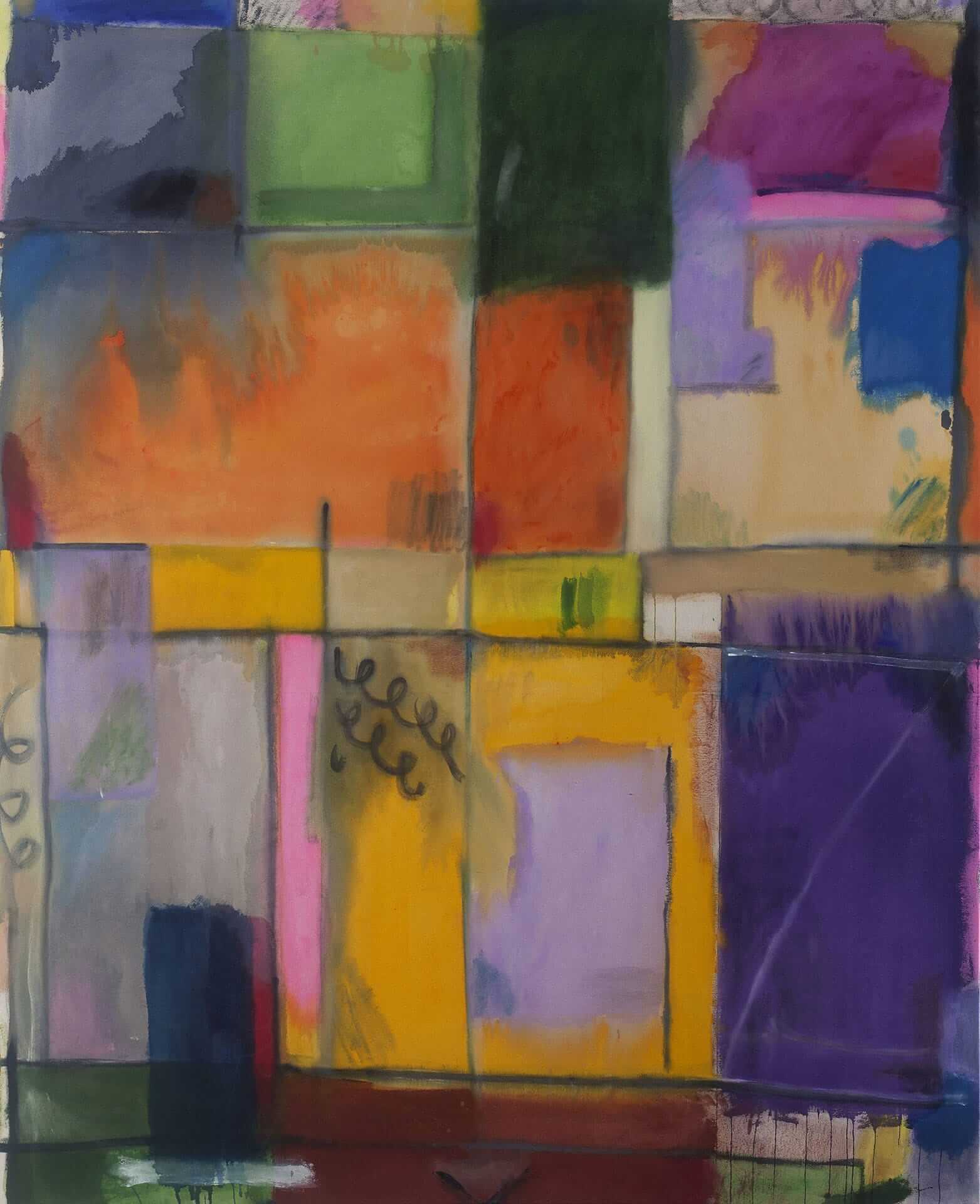 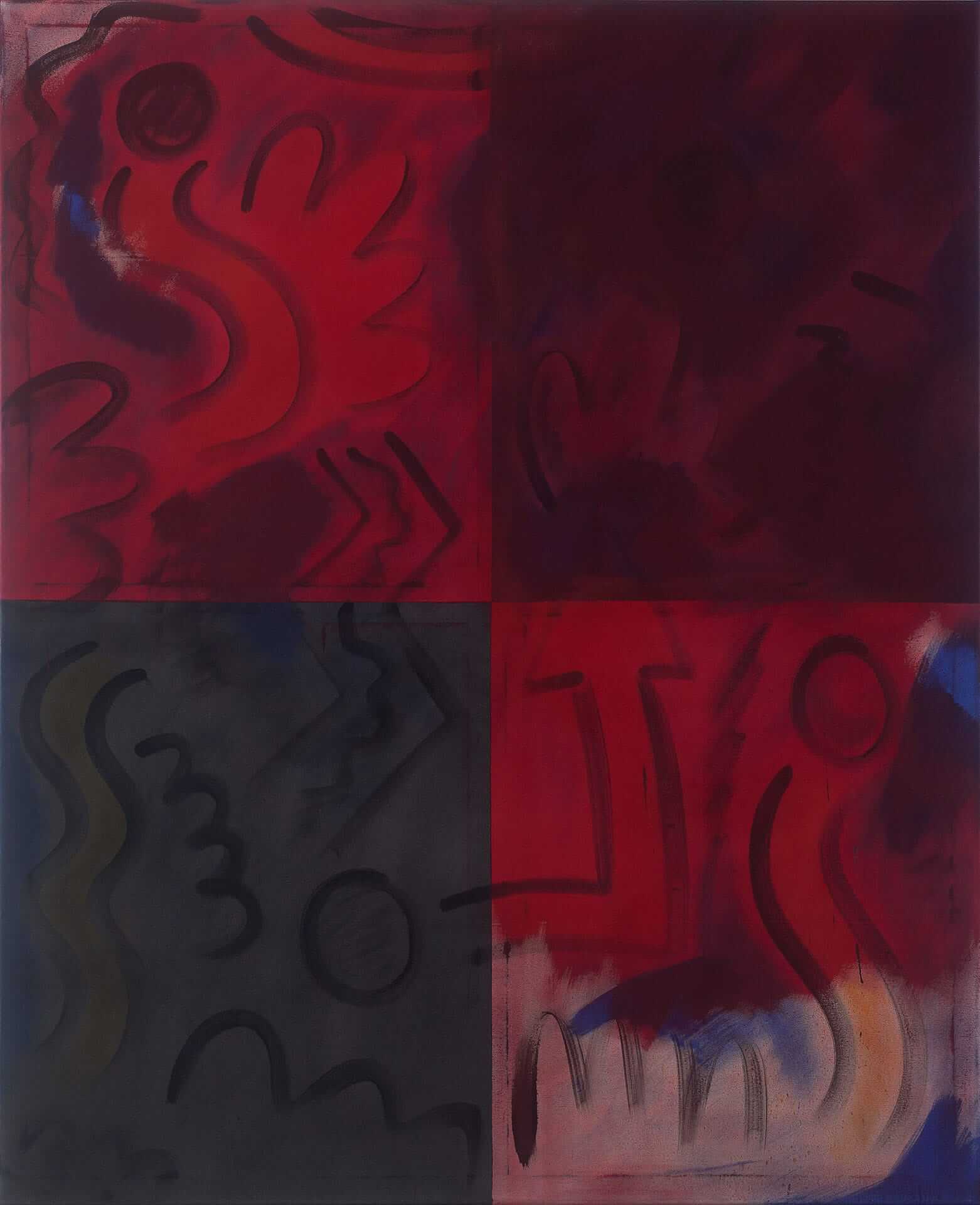 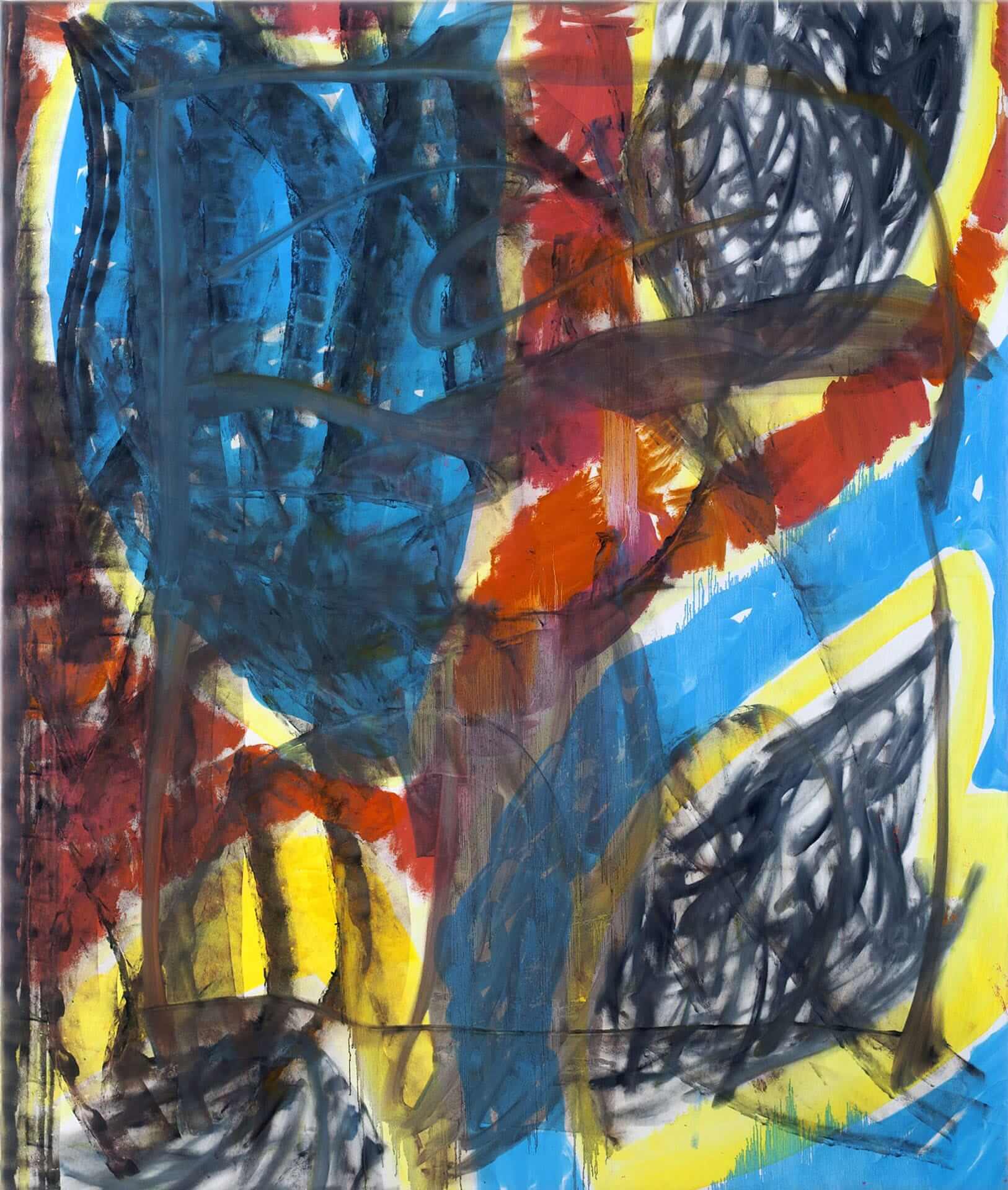 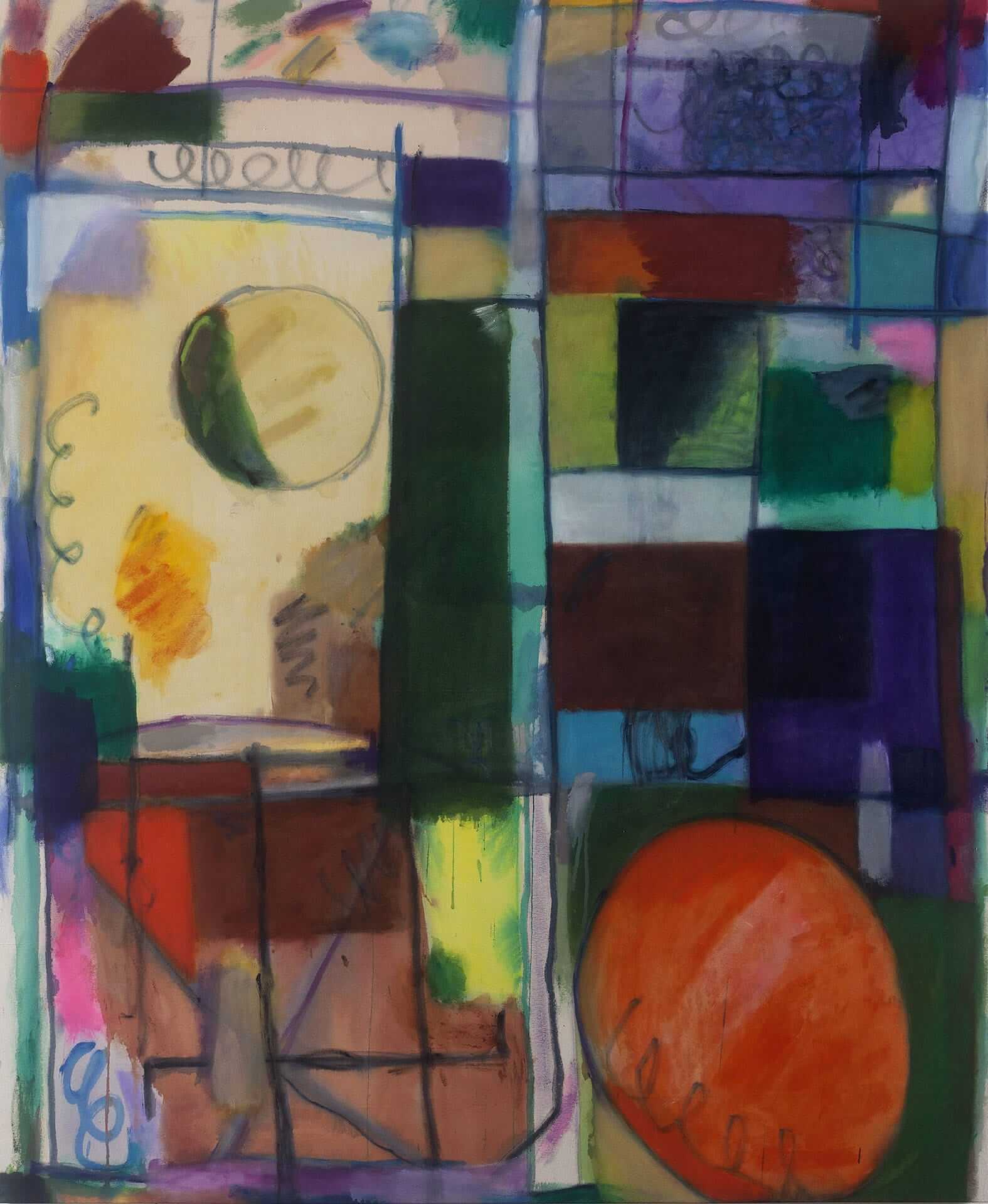 Black Hole Generation: ‘The Kings Are Back’

The Kings are Back is an exhibition of Black Hole Generation’s examination of contemporary culture and its propensity to overload us with visual stimulation.

The exhibition features twelve new paintings and six prints from Krňanský, Lukáč and Reichel. The paintings suggest much but disclose very little. Although visual clues lie within the canvases – arrows that point to something and tracks that could lead somewhere – much is left unsolved. Bright colours are always met with darker ones that hide and obscure. The playful shapes in Krňanský’s paintings are covered by black, blue or red. In Lukáč’s paintings, primary colours are hidden under thick black marks. In Reichel’s paintings, vivid oranges, pinks and yellows are met with deep blues, purples and greens. It is as if the works are asking us to decode something while at the same time destroying any progress we might make. Exhibited in the lower gallery, prints on canvas reflect an era of overproduction and digital reducibility. It is an attempt at the possibility of maintaining the atmospheric state of the paintings outside of their original body. Equally, this method overrides the originals by creating a new language through printing.

The work in ‘The Kings are Back’ plays with our expectations about what painting asks of us and what we ask of painting. While each artist’s work displays a clear style, the paintings have been made in dialogue with each other and should be seen as a visual collaboration. However, such visual symmetry should not be taken at face value. We are deliberately led down paths that take us nowhere or shown symbols that we cannot decipher. Although symmetry may first appear, a closer examination reveals puzzles and a playful allusiveness at the heart of Black Hole Generation’s work.

David Krňanský (b. 1987 in Prague) graduated from the studio of Jiří Černický and Marek Meduna at the Academy of Art, Architecture and Design (UMPRUM). His work includes painting, drawing, collage, and site-specific installations. Throughout his work he explores minimalist motifs and repetition, which subtly hint at modernism yet aesthetically diverge and interact with forms in contemporary pop culture and music. Krňanský has most recently exhibited his works in the group shows Paintings in Galerie SVIT in Prague, B.H.G: Black Hole Generation in Gallery Leto in Warsaw, AABBAB- BAACBC in Nová Galerie in Prague, and Czech Painting of the 21st Century in 10 Images at Měsic vedne Gallery, České Budejovice.

Julius Reichel (b. 1981 in Kaplice, Czech Republic) graduated from the Academy of Art, Architecture and Design (UMPRUM). He used to be an active graffiti writer which still has its influence on his urge to work in the public realm. He treats painting as an object and extends the definition of both of them. For Reichel an exhibition is an opportunity to test out specific principles and laws connected to gallery spaces, the audience and the principles of how institutions function. Rarely does he only exhibit paintings or objects. Rather, he strives (often with David Krňanský as in an artist duo) to supply commentary, a framework and meaning that might sufficiently validate, interconnect and in infuence the two of them, but also primarily a wider audience. Reichel has most recently had solo exhibitions at Gallery Ve Středu, Plzeň and Berlínskej Model in Prague as well as numerous group exhibitions.