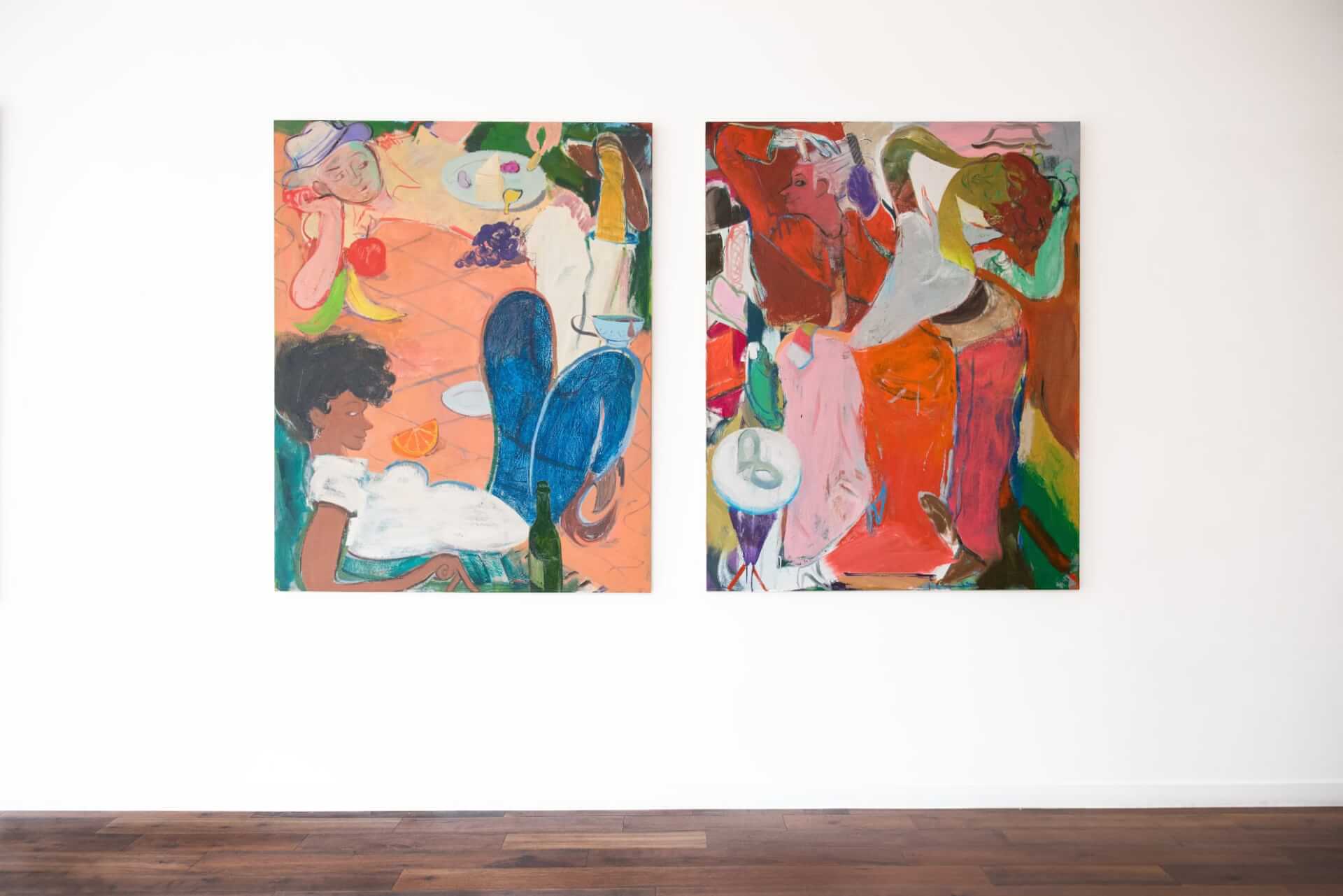 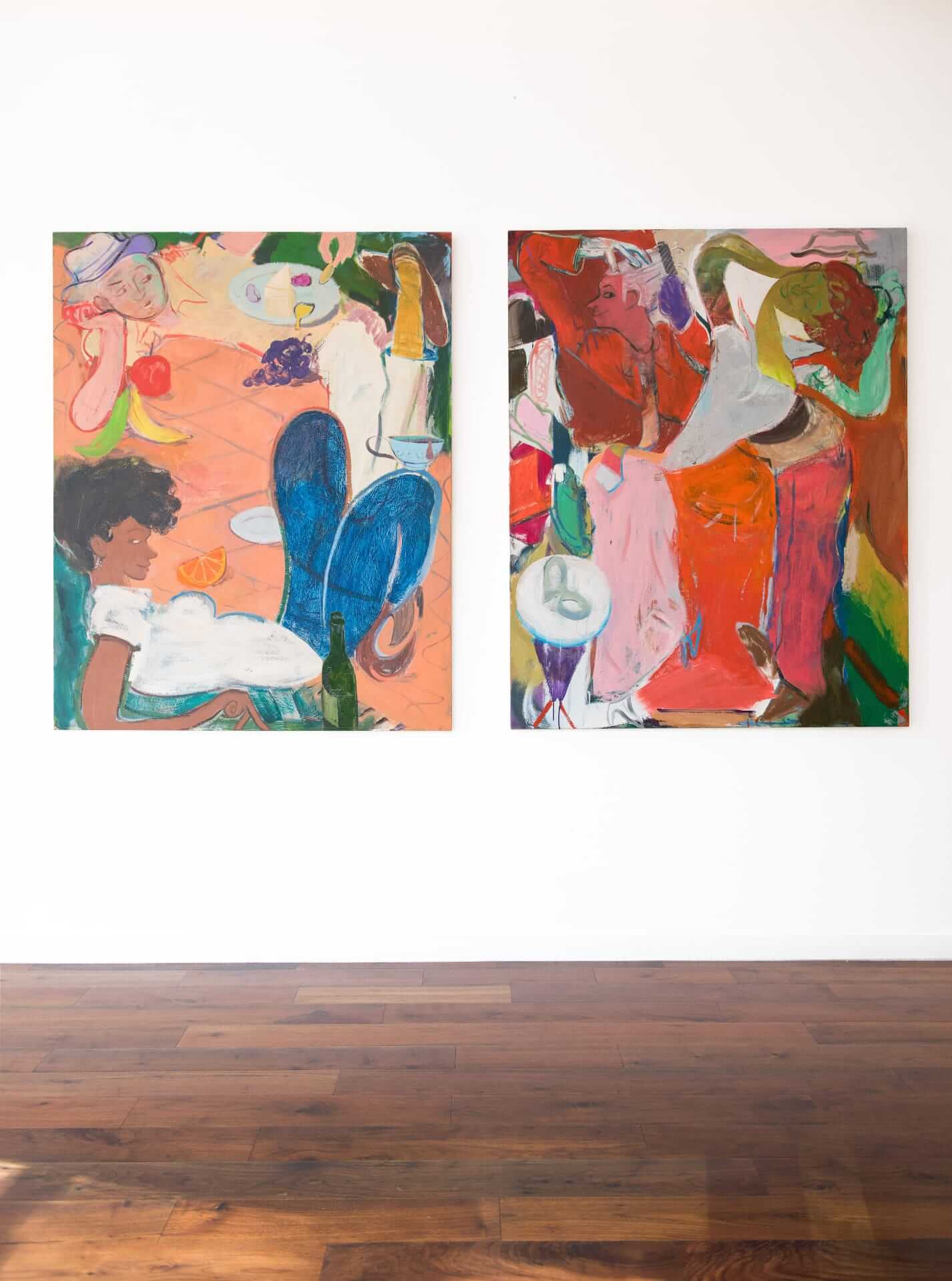 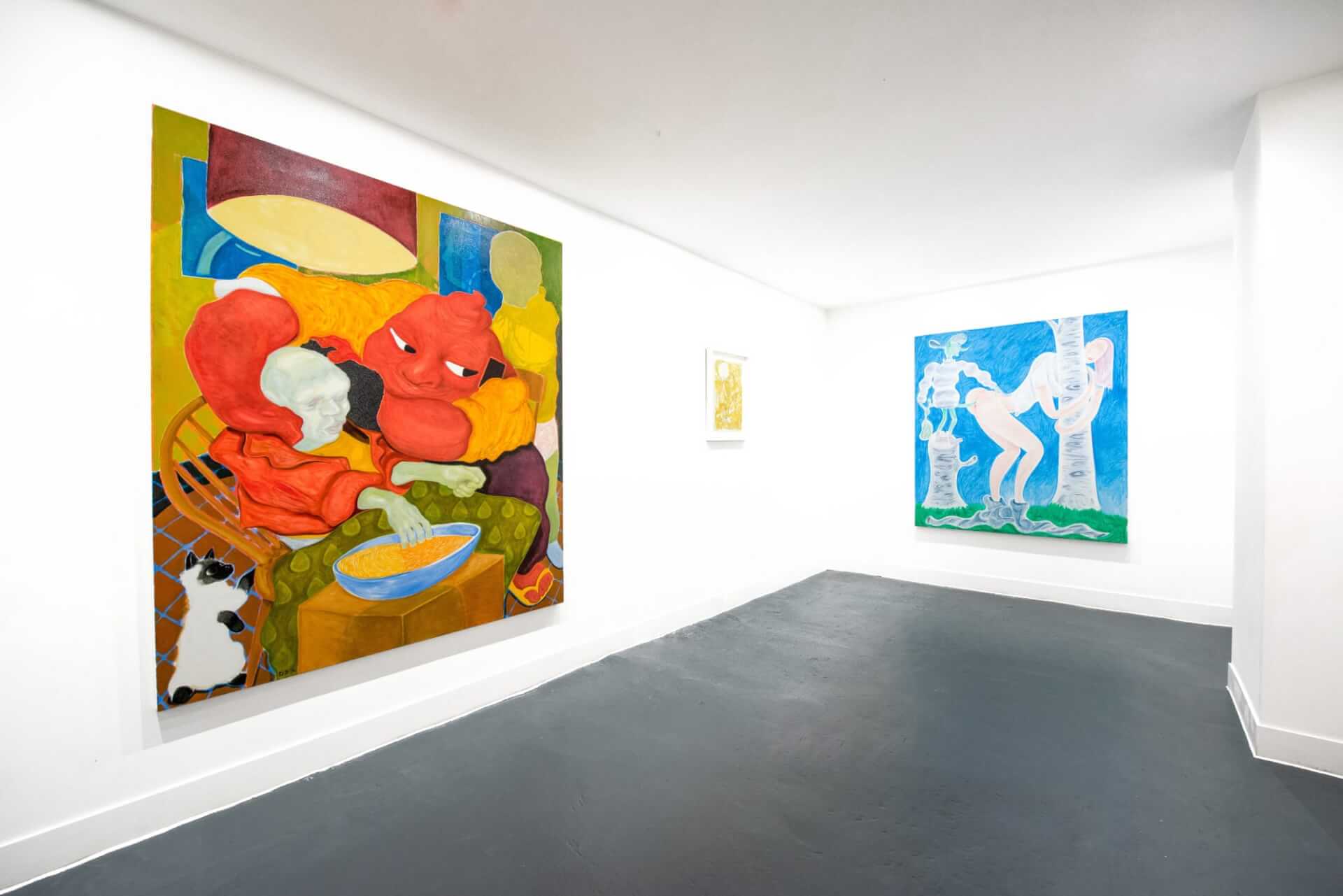 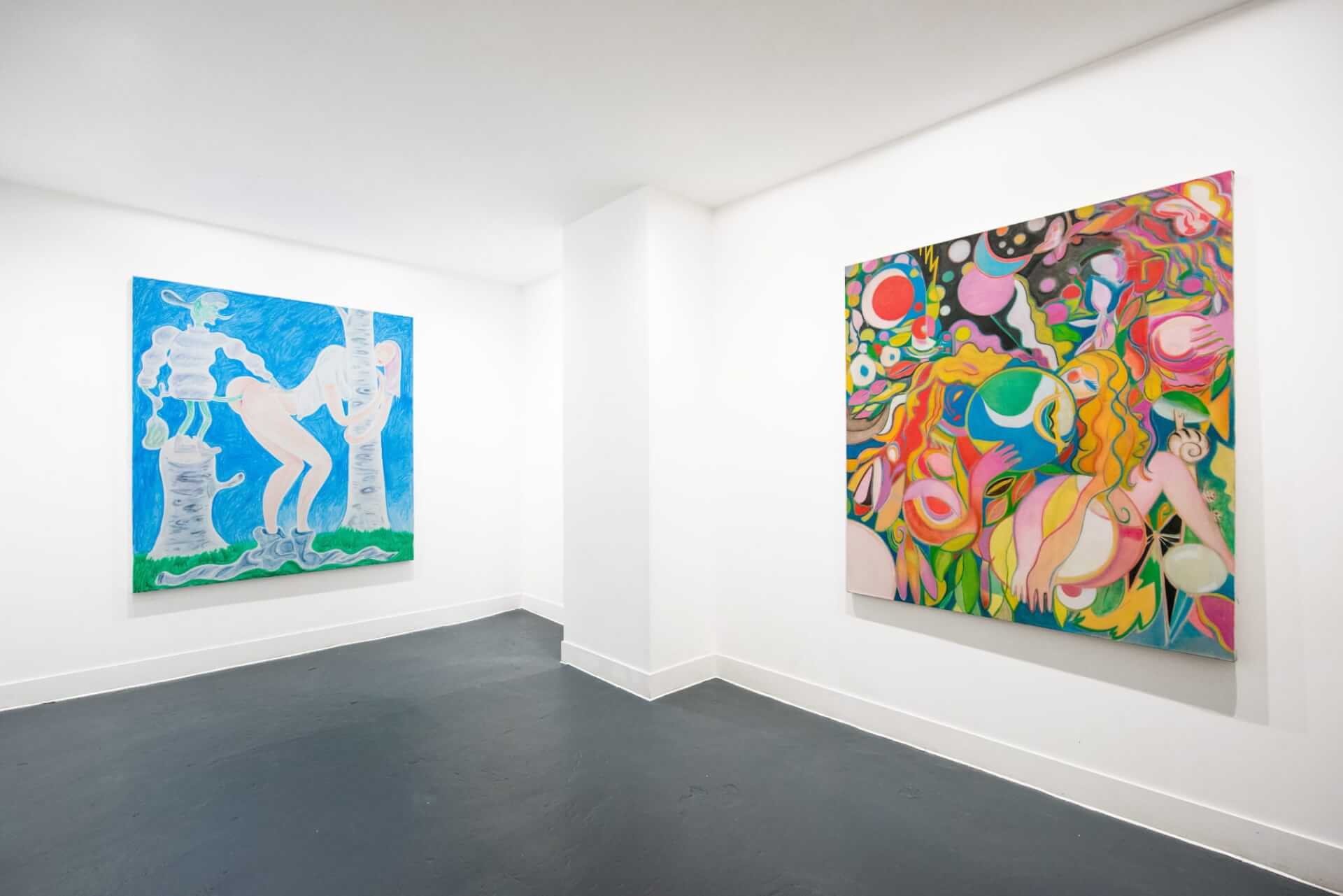 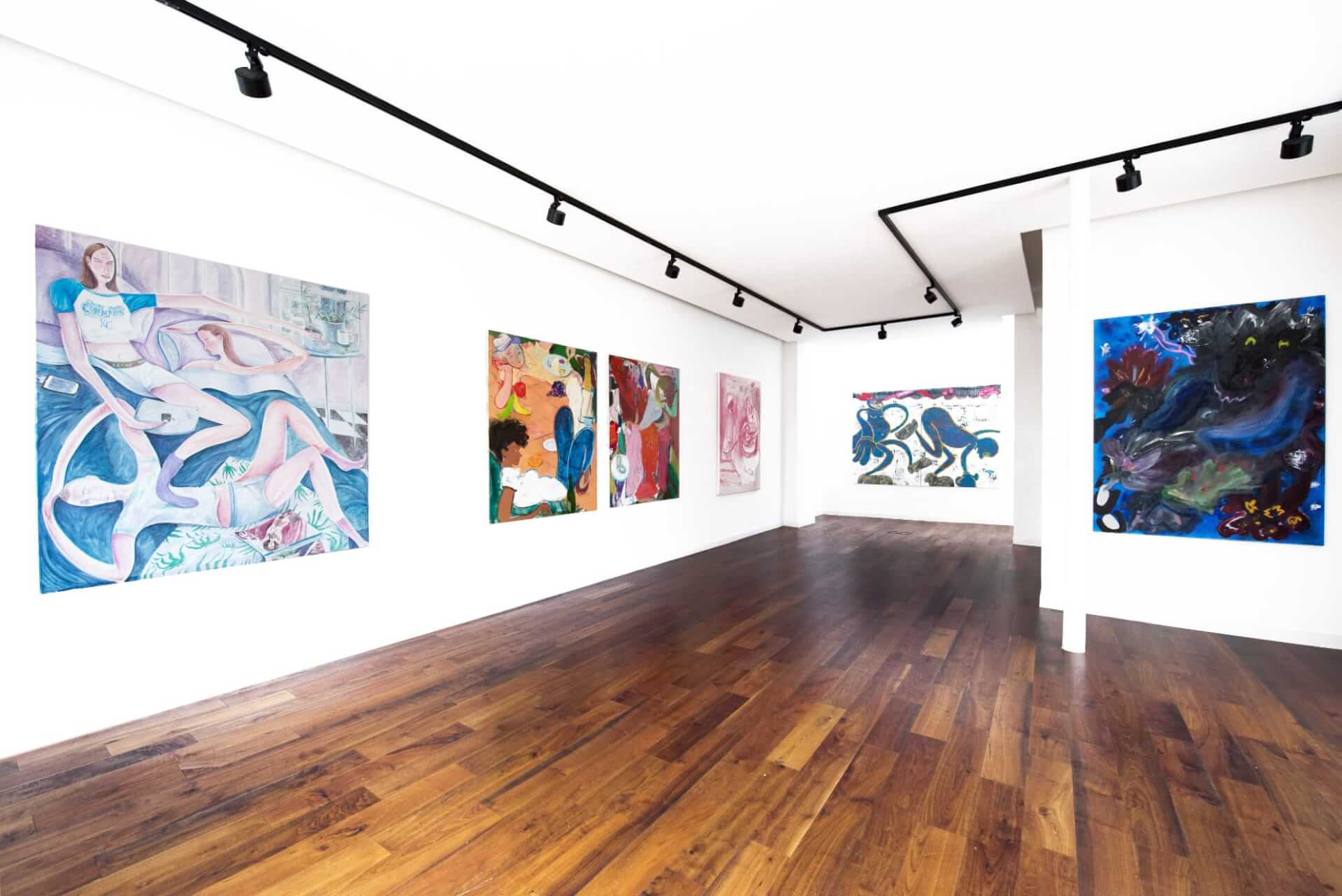 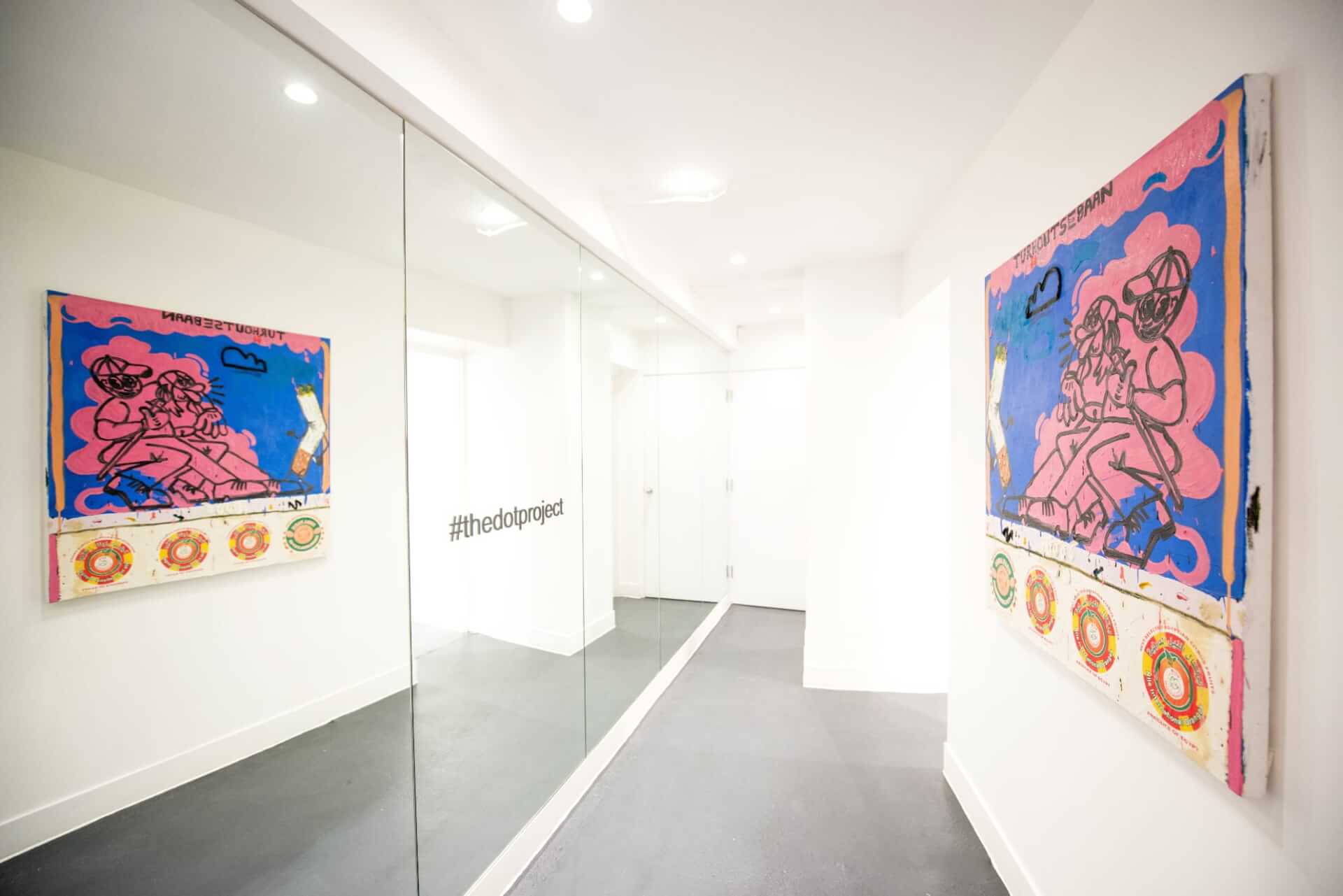 Figurative painting has continued its resurgence. Its current forms feature a wide range of experimental ideas, compositions and subjects. Figuration is an old art form, yet continues to evolve and is forever reflecting on themes based around human identity. This show features a group of young, innovative figurative artists who deal with the human form and figurative canon without being overtly academic. The title asks the viewer to look at figurative painting with a contemporary and fresh perspective through the eyes of artists creating work that is worldly and unworldly. Decades of conceptual abstraction have had a strong position within the dialogue of art and this show is a celebration of a new freedom within painting and the growth of figuration over the past few years.

A recent University of the Arts London graduate and founding member of London based arts collective The Cone Sisters, Thom Trojanowski Hobson relocated his studio to Antwerp last year for a year long residency to create a new body of work. Inspired by the 1969 film Midnight Cowboy and the parallels it has between his own time spent in this city, he depicts himself as a cartoon ‘cowboy’. The work shows the path he’s taking to be a contemporary painter and the struggles he has with his own practise. In search of glitz, glamour and success, he soon discovers it’s actually a life of hustle, poverty, pounding the street and solidifying friendships with partners in crime and grime. Hobson obtained a BA in Fine Art from Wimbledon College of Arts, London (2015) and lives and works in London. Hobson’s recent exhibitions include It’s A Long Way To Florida, KOP Artspace in Antwerp (2016) and the Exhibition of Art , Asylum Studios, Suffolk (2015).

Janeckova’s referential acrylic paintings use a lot of playful, complex imagery to deal with violence, sexual identity and nature. Her subjects are young beautiful women who offer themselves to the eyes of the viewer – voyeur, as in online pornography. However in the medium of painting, as opposed to videos and photography, it takes a different approach, whereby reality is distanced. Katarina’s girls are never mere sex objects, they lead the game of seduction – they lay down the rules. There is nothing left for man in the guise of the lover bear, but to make a fool of himself. Janeckova was born in Bratislava, Slovakia where she obtained a BA at Academy of Fine Art (2013) and is now based in Texas and New York. Her recent exhibitions include HOW TO MAKE A BEAR FALL IN LOVE, Studio d’Arte Raffaelli, Trento (2016), JANECKOVA ON STEROIDS! Atelier XIII, in Bratislava (2015) and SALMON LOVERS, Galerie Wolfsen, Aalborg, Denmark (2015).

Fascinated by relationships, Lux’s current body of work developed as a consideration of ‘the couple’. Memory and references, subconscious structures and reoccurring fantasy elements exist together as part of an adventurously transgressive pictorial language. While underpinned with the artist’s characteristic vivid colours, untamed flowing lines, and carefree painterly gestures, these works engage with themes of identity, gender, and escapism. The subject matter – people, places, and relationships – loosen, dissolve and flourish, in a world where the rules remain wonderfully malleable. Lux’s paintings tease the viewer, inviting you in and keeping you at bay. The paintings make sense and they don’t. The colours slide from sweet to aggressive; the figures appear seductive and mocking by sudden turns, yet for all the flirtation and foreplay, these pictures manage to conjure enduring frustrations about life and painting. Jonathan Lux was born in 1976 in Bluefield, West Virginia and now lives and works in London. He received his MA in Painting from the Royal College of Art in 2014. He has had a number of solo exhibitions in the USA and was included in Saatchi New Sensations 2014. Lux was the winner of the 2014 Valerie Beston Artists’ Trust Award.

Nye is interested in depicting a visionary pictorial space. Her ideas are extracted from a deep history of fantasy making and exposure to narratives related to her southern roots, drawn to fantasy and science fiction in pop culture of the 70’s and 80’s. Lye’s work is feminine and speculative, and it also illustrates ideas about painterly gesture, complexity and visionary expression. Her body of work is posed as a collaboration with strong female muses from an alternate reality she has created who reside in the ‘Andromeda Galaxy’. The Andromedans are a hybrid (part organic/part machine) race of interstellar travellers who seek to preserve and cultivate natural worlds, eradicate cruelty, and restore balance in the universe. The resulting works are presented as a biophiliac tableau and offer ways of seeing beyond the hybridity of our increasingly cyborgian world. Born in Memphis, TN in 1972, Laurie Nye now lives and works in Los Angeles. She obtained BFA at the Memphis College of Art she went on to do an MFA at the California Institute of the Arts in 2000. Her exhibitions include the 2015 Andromeda, 5 Car Garage, Los Angeles, CA, the 2013 The Crystal Eaters, Statlor Waldorf Gallery, curated by Molly Larkey, Los Angeles, CA and the 2011 Nature Diamond Figure, Parker Jones Gallery, Los Angeles, CA.

Perkins’ practice is fuelled by the ongoing making of imaginative drawings; unplanned, low tech, messy, scrappy. Drawing is the root of her paintings practice and enables her to paint intuitively and expressively on canvas. The frenetic scribblings are done on any surface to hand, a brown paper bag, bit of cardboard or handmade rag paper is all the same. The drawings develop by responding to the previous mark on the paper until an image that resonates is dredged from the depths. The characters that emerge in her paintings are equally unexpected and unruly, as in a carnival. They appear at first to be comic, playful and sometimes grotesque, but like a carnival they play not only with the surface, but with what the surface hides. They are a response to human vulnerability in the face of cosmic absurdity. Paige Perkins was born in the USA and lives and works in London. Educated at the Sarah Lawrence College, New York doing a B.A. In Liberal Arts she went on to do an MFA at the University of Brighton and then continued to do the Turps Banana Painting Programme from 2014 – 2016.

Born in 1981 David Surman is an artist and film maker based in London. His work explores the projection of imagination and memory into contemporary life. The absurd, tragic and humorous dimensions of the everyday are articulated through vibrant draughtsmanship and painting. He strongly believes that drawing and painting has a prominent role to play in making sense of our accelerating culture. Influenced by his early background as an animator, he brings the cartoon language of exaggeration and movement into a synthesis with the codes and conventions of oil painting. David’s artistic inspirations are wide ranging and include animated films, videogames, the work of Asger Jorn, Nicole Eisenman, and English satirists such as Rowlandson and Gillray. David studied animation at Newport Film School, film at The University of Warwick and printmaking/ illustration at Camberwell College of the Arts. His recent exhibitions include works at The Perth Centre for Contemporary Photography and Beam Contemporary, Melbourne.

Roberts’ works borrow from art-historical and pop-cultural sources. Working in his studio to an exclusively hip-hop soundtrack, Lil Wayne and Rick Ross are as much of an influence as his other heroes, European Renaissance masters Pieter Bruegel and Van Eyck. The result is full of energy, determination and a unique expression. Tight line that draws the women’s contour creates a seductive and distorted realism – gorgeous female figures are all painted with a very cheeky attitude that derives from hip hop culture’s parallel universe and its ability to create an illusion of a great lifestyle. Born 1984 in Kansas, USA, Charlie Roberts lives and works in Oslo, Norway. He was educated at Emily Carr Institute of Art and Design, Canada and Kansas University, USA. His recent exhibitions include Halcyon Daze, Richard Heller Gallery, Los Angeles (2016), JUICY FRUIT, Kravets/Wehby, New York (2015), Juicy XXL, David Risley Gallery, Copenhagen (2015).

Born in 1975, the former club owner, Ulrich Wulff spends half of the year in the desert of California, where he owns a house together with an old fuel station and lives and works in the German Capital during the remainder of the year. Wulff’s painting reveals both a love of colour and gestural abstraction, but it is a minimalist’s love. The recurring shift in Wulff’s work between abstraction and the shuffling figure bears some affinity with the kind of new image painting that enjoyed a vogue in the late 1970s and 1980s, but whose legacy has extended into this century. In other words, the ideogrammatic aspect of some of his previous work, though still present, has morphed into a pictogrammatic domain. Solo exhibitions include,Wo soll das noch hinführen, EXILE Gallery, Berlin (2016), PREPARATIONS, TIF SIGFRIDS, Los Angeles, USA, (2015) and Sense and Sensibility, Truth and Consequences, Geneva, Switzerland (2014).