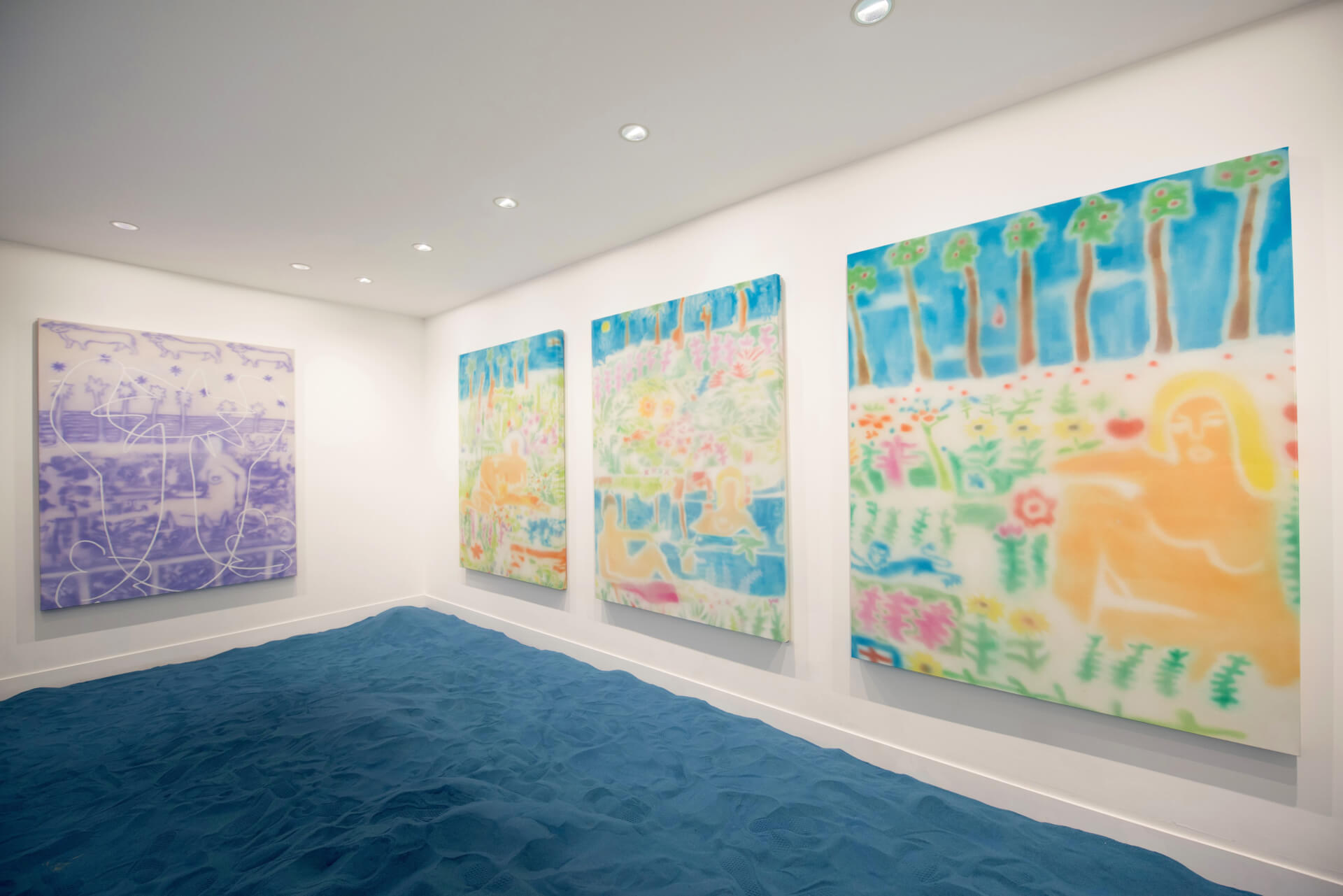 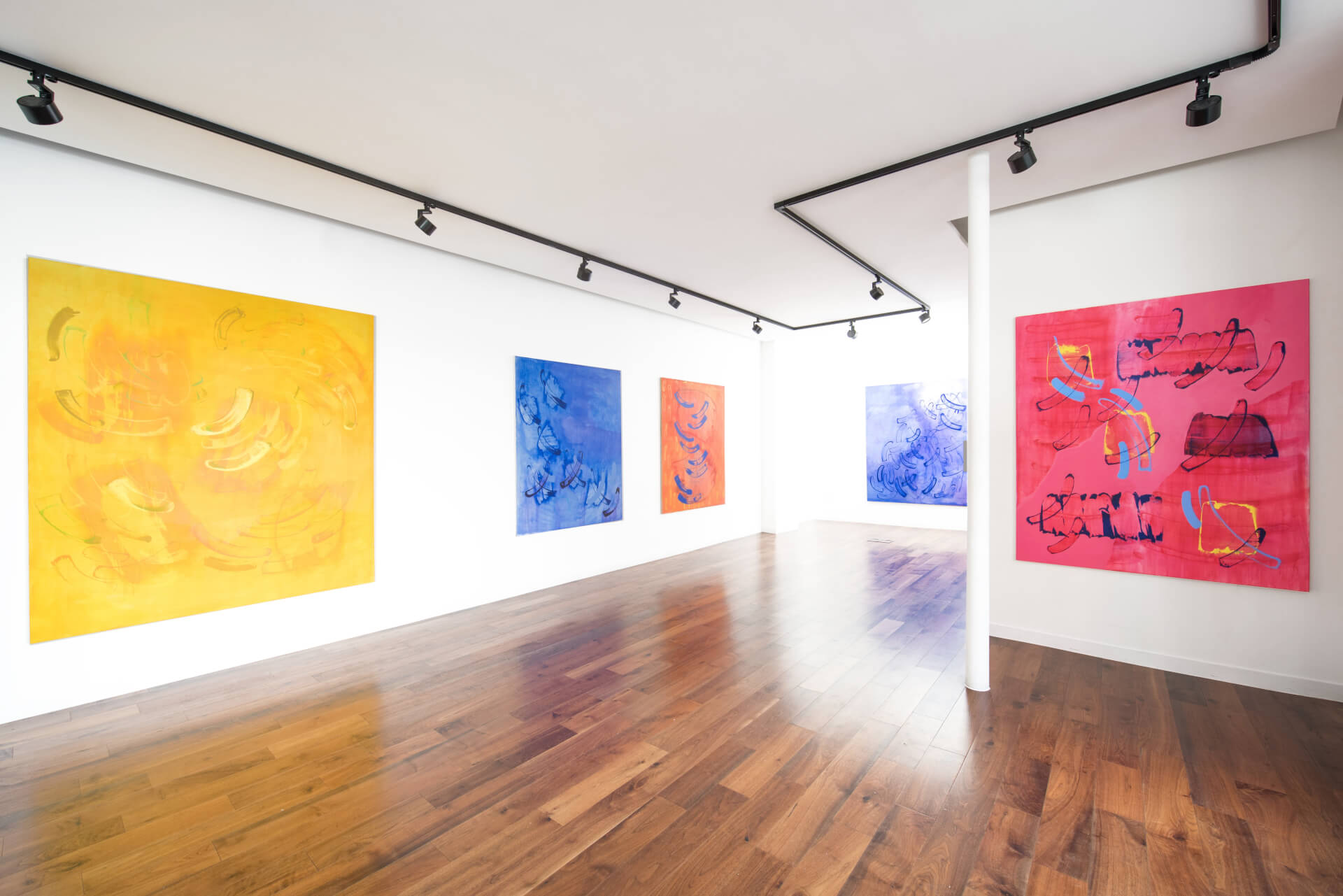 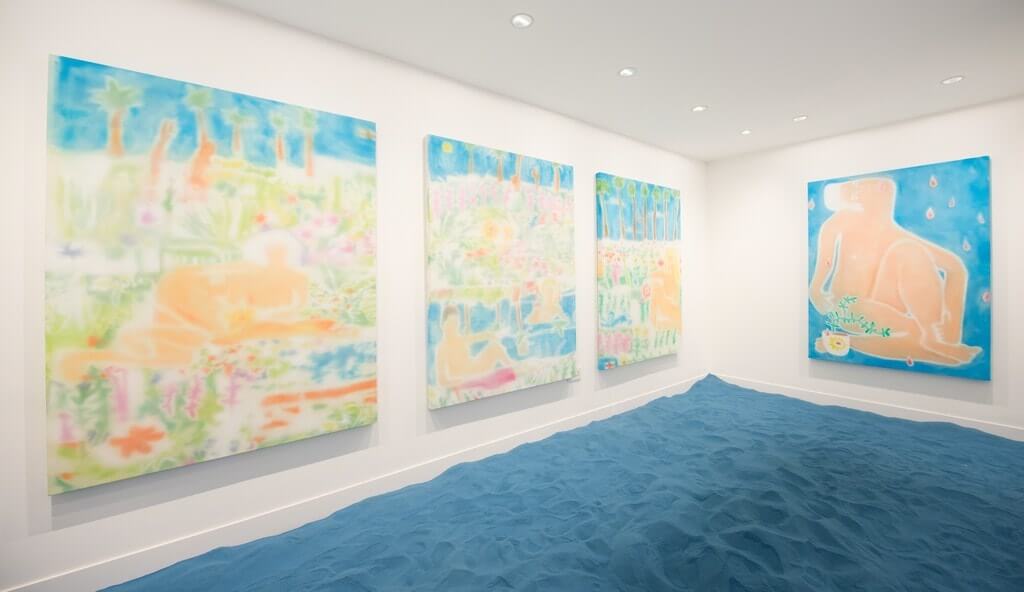 I Found This Supernova in Your Summer House

The Dot Project is pleased to present ‘‘I Found This Supernova In Your Summer House’, a dynamic show featuring the practice of two London-based artists Goia Mujalli (b.1985) and George Rouy (b. 1994). Both artists express the idea of a supernova through a sense of ephemerality in their work and ambiguous forms created by using explosive actions and colour in their paintings. Each artist uses a process of layering and mark making. George forms colorful and leisurely illusions through his relationship with technology and figurative painting. Goia’s relationship with mark making and abstraction is played out through a group of rhythmic works, which the artist described as ”Banana Paintings’’.

Goia Mujalli investigates paint as a material and how it sits on a surface. Like a series of valves in a constant state of contraction and expansion, her work operates through things, situations and states, which enter the painting and run their course. Does the act produce the meaning? Removal – as metaphor for doubt or ephemerality – would be the best word to describe this painting process. All the paintings are marked with erasures, with moments of presence and precision. At first an act of indecision, these marks become a conscious part of the process. Through the repetition of rhythmic marks, the abstractions in her paintings re-create the essence of existing objects and states.

Goia Mujalli is a Brazilian artist based in London. She obtained a BA in Industrial Design from PUC – Rio de Janeiro, 2011, a BFA from Slade School of Fine Art, 2015 and is currently doing her Masters at the Royal College of Art, 2017. Recent and upcoming exhibitions include a solo show in Rio de Janeiro, Brazil and at the Brazilian embassy in London.

George Rouy’s ‘Coast of the Sun’ series reflects and materializes the memories and sensations, which he has experienced between two landscapes, England and the Costa del Sol. The paintings recall visceral and human actualities like eating, walking, swimming and feeling the heat of the sun after the English winter. The English muse sits within the Spanish landscape, which derives from the apartment gardens and surrounding areas. The visual cultures in their union create a distorted representation of neither here nor there but instead a portrait of the lived duality which easy jets back and forth between England and the Costa del Sol.
It’s no coincidence that Rouy’s works have been created during the prelude to the EU referendum. The transformation of a predominantly Spanish holiday destination to one which offered ‘Brits Abroad’ a 1 euro pint with Sky Sports, greasy spoon cafes and towering package holiday resorts, which altered the landscapes identity. Rouy’s work reflects a cultural flux whereby a foreign coast integrated within English working class culture and household names is then abandoned after the economic recession hit, leaving Spanish ghost towns.
Rouy obtained a National Diploma in Art and Design from UCA Rochester, 2012 and a BA in Fine Art Painting from Camberwell College of Arts, 2015. Rouy lives and practices in London.